What is a mesogun?
Mesogun, injection gun, mesotherapy gun, pistolets and automatic injector are some of the terms used when referring to injection devices used in mesotherapy. Just like mesotherapy itself, injection devices used in mesotherapy have also gone through many generations of evolution. The first generation included the Pistormatic invented by Dr. Pistor, the father of mesotherapy. Subsequently Dr. Pistor experimented with other innovations such as the multi-injectors. These consisted of a disk mounted by numerous needles which would attach to a syringe allowing several injections at once. These devices proved to be ineffective and problematic. These multi injectors were also noted to significantly increase the rate of complications. In particular these multi injectors were giving rise to local bruising, increased pain and local infection.

Modern injectors all consist of hand held devices upon which a single syringe and needle unit is mounted. The available functions vary depending on the injector. These devices range from fully automatic to semi-automatic. Functions often include continuous versus intermittent injection, variability of rate of injection or frequency of the intermittent mode, variability of depth of injection and capability of the device to accommodate various syringe sizes.

What do you need to know about mesotherapy products?
Our complete line of mesotherapy products satisfies all physicians, or health care professionals, interested in integrating these products into their practice. Mesotherapy is the latest breakthrough for spot weight reduction, body-sculpting, cellulite reduction and skin rejuvenation.

How big of an injection do you need for mesotherapy?
The injections can be given at different depths — from 1 to 4 millimeters into your skin — depending on what condition you’re having treated. Your doctor may place the needle into your skin at an angle, or flick their wrist very quickly while injecting. Each injection may only place a tiny drop of the solution into your skin.

The Patient’s point of view
We will attempt to answer this question by looking at the treatment from the point of view of the patient and the practitioner.
Since patients always come first in medicine and their safety and comfort is the physician’s number one priority we will look at the patient first. Probably the number one concern patients have when inquiring about mesotherapy is pain . When they first learn that the procedure may consist of 100 to 200 injections the next question is usually:

How much is that going to hurt doctor?
In order to answer this question let us first review various factors that contribute to the patient’s perception of pain. These include individual pain threshold, sensitivity of the treatment area, diameter or gauge of the needle, sharpness of the needle, speed of needle penetration, needle vibration at the time of puncture, skin stability at the time of puncture, the medication being injected and finally the speed of injection.

Among these factors, variables that can be affected by use of an injection gun are speed of needle penetration, needle vibration at the time of puncture and skin stability at the time of the puncture.

Skin stability
When performing injections manually usually there is some skin movement before the skin gives and allows the needle penetration. This is significantly reduced with an injection gun. Most injection guns come with a skin stabilizer which is typically mounted at the very tip or the nose of the gun. This usually consists of a plastic end piece that rests on the skin at the time of injection. This small addition helps to stabilize the skin and prevent movement at the time of injection therefore reducing the pain perceived by the patient.

Needle Vibration
Needle vibration at the time of injection typically depends on the physician’s technique and hand stability. This also is considerably reduced with use of a mesogun.

To what extent? The answer of course is that it depends on the gun.

There is much less vibration with automatic mesotherapy guns compared to semi-automatic ones. This difference will be explained later. However a recent innovation in some injection guns which tremendously affects needle stability and therefore patient comfort is the needle-syringe separation . As implied by the term, this creative modification in some of the newer guns allows the needle to move without the syringe having to go back and forth. Although this may seem trivial, this creates much less inertia and force. Less mass movement not only allows the needle to be more stable at the time of skin puncture, but also causes less trauma to the skin at the time of penetration. For the patient this translates into less pain and less bruising and allows treatment of more sensitive areas such as the face or the scalp.

Speed of needle
The speed of needle is probably the variable that makes the most difference in patient pain perception. Of course the faster the needle penetrates the skin the less pain is perceived. This is probable one of the main reasons mesotherapists use an injection gun. This again is very variable among different guns. In semi-automatic devices the speed of the needle is directly controlled by the practitioner who needs to push the devices. In fully automated devices this step is controlled by the gun itself and tends to be much faster. The difference between semi-automatic and fully automatic devices is explained below in the section on automatic injection devices .

Let’s now consider the practitioner’s point of view:
Of course physicians our concerned about all aspects of the procedure, but as far as the ease of technique itself is concerned, several factors were consistently mentioned in our discussions with physicians performing mesotherapy. These included wrist and hand fatigue, comfort while administering injections and consistency and accuracy from one injection to the next.

The Physician’s point of view
Fatigue
Fatigue was probably the number one concern among physicians performing a significant volume of mesotherapy. Practitioners commented that doing several treatments in one day could be quite demanding on the hand and wrist. We have found that automatic injectors alleviate this concern to a great degree. In fact some physicians who previously noticed blistering and callous formation in their palms noted complete resolution of the discomfort since they started using a mesogun. The reasons are simple. When using a mesotherapy gun, instead of needing to holding a syringe and needle in a tight grip while concentrating on administering dozens to hundreds of injections in a consistent desired manner, when using a mesogun the physician simply needs to press on the trigger (fully automatic injectors) or press on the trigger and push the device forward.

In most devices the handle is ergonomically designed for added comfort.

Consistency and accuracy
When the procedure is performed manually consistency and accuracy from one injection to the next and from one treatment to the next depends on the mesotherapists skill level and experience. The mesotherapy gun takes this human factor out of the equation. Once the settings are adjusted as desired, most devices are designed to administer consistently the same amount of medication and at the same depth of penetration over and over and over again. Each device however is different in number of settings that can be adjusted in order to perform the procedure as desired. These settings include dose, rate, frequency and depth of injection. These need to be carefully considered before any injector is purchased.

How to choose the right Mesogun?
This distinction refers to the mechanisms of injection (i.e.: skin penetration) and delivery of medication. In fully automated devices both of these functions are performed by the injection gun at the press of a button. In other words, once the gun is in position on the patient’s skin, upon pressing the trigger, the needle penetrates the skin at the desired depth and the gun delivers the cocktail without any further effort by the mesotherapist. By contrast in semi-automatic devices usually the operator needs to push the injection gun holding the needle in the skin while the gun delivers the medication automatically. Semi-automatic devices tend to be considerably cheaper than fully automatic ones.

Currently the most popular mesotherapy gun devices on the market.

The fully automated devices which are becoming increasingly more popular.

Each of these devices offers its own unique differences, advantages and disadvantages. Therefore practitioners are urged to do their research in order to find out which would be most suitable for their individual practice before the purchase decision. For further information on these or other mesotherapy guns you can contact MesoGuns.com. Our friendly staff will be happy to answer your questions or address your concerns. 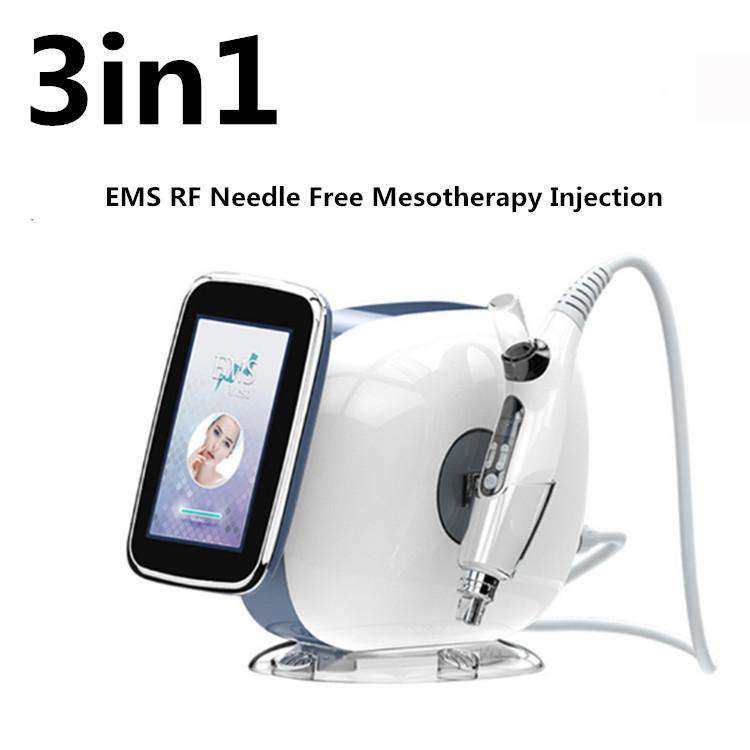 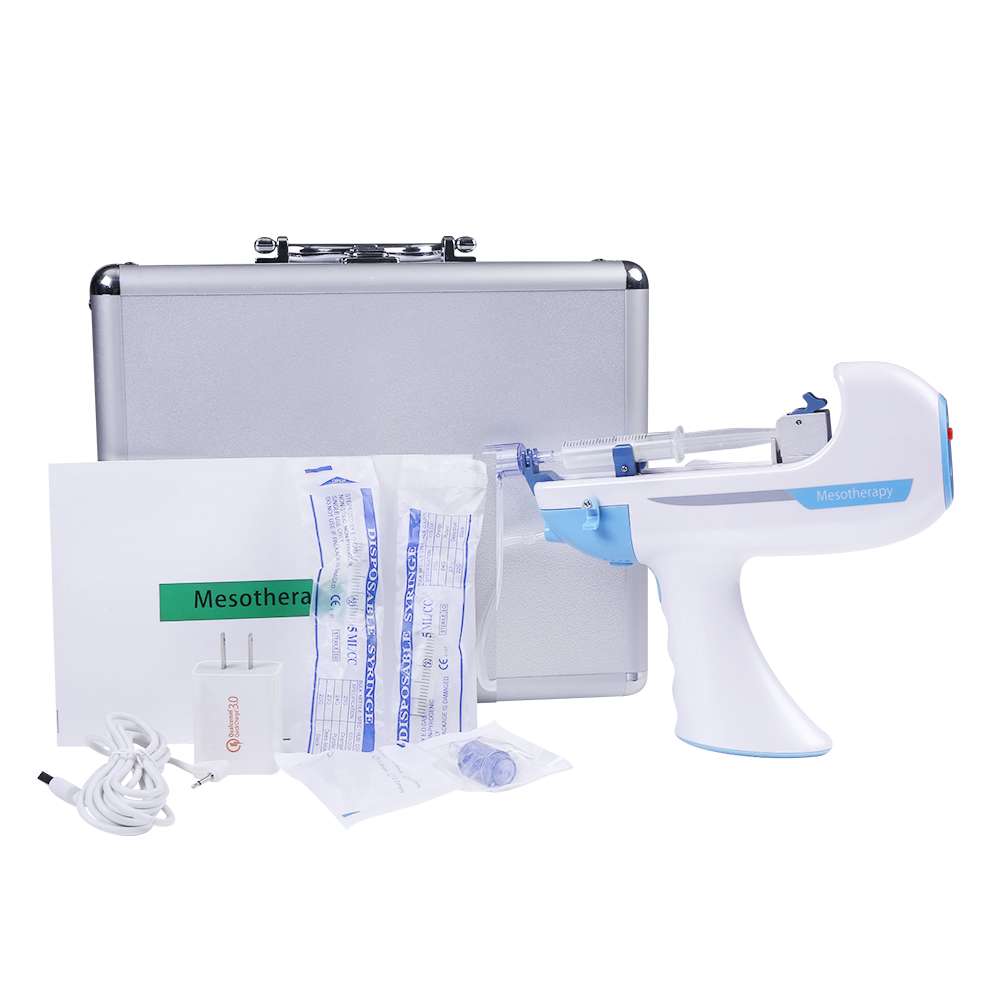